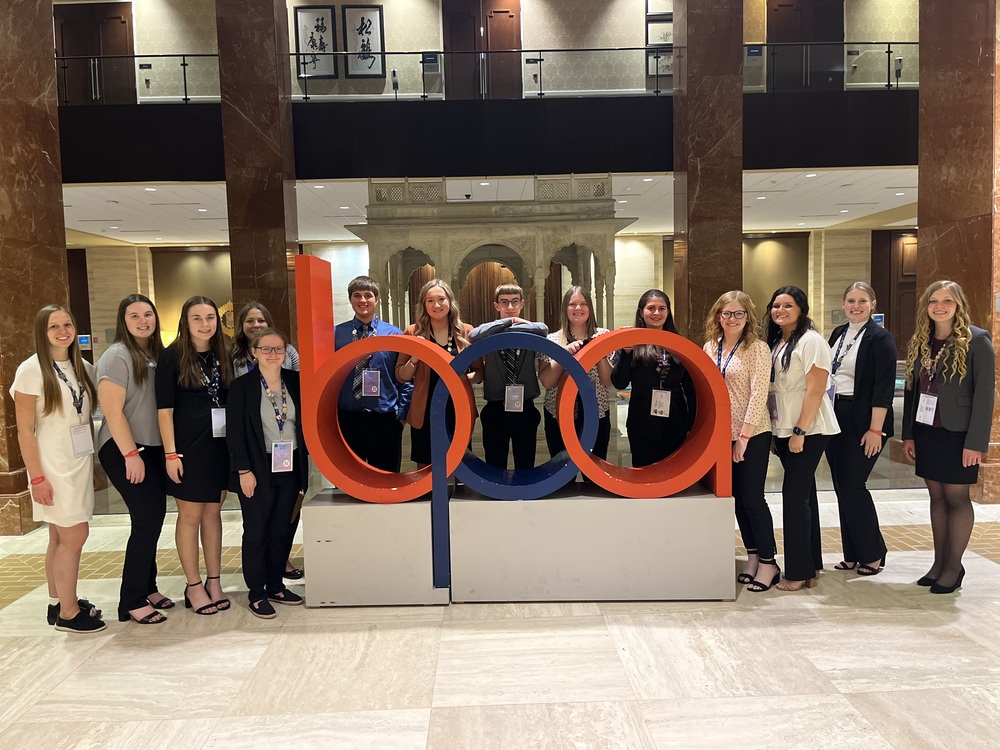 On Wednesday, May 4th a group of 13 MVAOCOU students and 3 adults left Mapleton for a trip to Dallas, Texas for the Business Professionals of America National Leadership Conference in Dallas, Texas.  The group qualified to attend the national conference after performing well at the state conference in February in Des Moines.  The group was supposed to attend the conference’s Opening Ceremonies that night, but missed it due to a combination of weather-related flight delays, baggage issues, and rental car delays.

On Thursday, May 5th, the students were up early to begin competing.  Competitions were scattered throughout the day.  In their downtime, students and their chaperones went on multiple tours around the Dallas Metro, including the 6th Floor Museum where President John F. Kennedy was assassinated, the famous Fort Worth Stockyards, and numerous artistic displays and parks around downtown.  Following competitions and tours the groups split up.  One group tried their hand at axe throwing and the other visited an escape room.

On Friday, May 6th, the competitions began early again.  When not competing, students spent downtime exploring the area some more with their chaperones, visiting local parks and landmarks and AT&T Stadium, the home of the Dallas Cowboys.  Once the competitions were finished for the day, the group visited Avila’s Mexican Restaurant, which was once featured on the Food Network’s Diners, Drive Inns, & Dives, then returned to the hotel for a Texas-style hoedown with students from other BPA chapters across the nation.  There they danced, played yard games, got to sit on a long-horn, and socialized.  On Friday, the chapter also learned that two events qualified for finals, which meant they were officially in the top ten and were scheduled to compete on Saturday.  Cadence Koenigs got a call-back for her Digital Media Production competition, where she created an unboxing video for a tech tool of her choice and then presented her video and a breakdown of how she created it to a panel of judges.  Cadence unboxed her Dexos Continuous Glucose Monitor.  The Parliamentary Procedure Team also qualified for finals.  The group was given different motions and requirements and had to perform a mock meeting using proper parliamentary procedure in front of a panel of judges with just 15 minutest to prepare.

Early Saturday, May 7th the students who qualified for finals presented their final time and then met up with the rest of the group to head to Six Flags Over Dallas where they spent the day riding roller coasters and soaking up the sunshine.  The group then returned to their hotel to prepare for Closing Ceremonies & Awards where the top three placements in each competition were announced.  While no students from MVAOCOU ended up in the top three in their competitions, the group is extremely proud of its two top-ten medalists!

The group was up early on Sunday, May 8th to catch their flight back to Omaha so they could return home and see their moms for at least a couple of hours on Mother’s Day!

Below is a list of all of MVAOCOU BPA’s students who attended the National Leadership Conference and the competitions they participated in.